“At El Pollo Loco, we take National Burrito Day very seriously given our selection of burritos are cult favorites amongst fans, especially our new Mexican Shredded Beef Birria Burrito. This year we’re doubling down on our celebration as an ode to burrito lovers and Loco Rewards members alike,” said Chief Marketing Officer . “From double points on burrito purchases to everyone’s favorite, Buy One Burrito Get One Free, celebrating this treasured holiday at has never been easier.”

Kicking off on , the lineup of epic National Burrito Day deals includes:

: New and existing Loco Rewards members can receive double points on all burrito purchases, including the new Mexican Shredded Beef Birria Burrito Box, on only. Double points will be automatically awarded to loyalty accounts on qualifying purchases.

: New and existing Loco Rewards members will automatically receive a special Burrito and Large Drink reward valid on only; tax not included. Offer is valid for all à la carte burritos, including the new Mexican Shredded Beef Birria Burrito.

National Burrito Day, : New and existing Loco Rewards members will automatically receive a special BOGO Burrito (Buy One Get One Free Burrito) reward valid on only; tax not included. The offer is valid for all burritos, including the new Mexican Shredded Beef Birria Burrito Box. Additionally, FREE delivery will be applied to all delivery orders on only; no minimum purchase required.

To participate in National Burrito Day promotions this year, download the app and register for Loco Rewards to receive these offers and more throughout the year. For more information, visit ElPolloLoco.com.

(Nasdaq:LOCO) is the nation’s leading fire-grilled chicken restaurant with a mission to bring people together around food, family, and culture in the communities it serves. is renowned for its handcrafted food, an innovative blend of traditional Mexican cuisine and better-for-you eating, that is known for. Since 1980, has successfully opened and maintained more than 480 company-owned and franchised restaurants in , , , , , and while remaining true to its Mexican-American heritage. continues to grow and evolve, nourishing connections to tradition, culture, and one another through fire-grilled goodness that makes us feel like familia. For more information, visit us at ElPolloLoco.com.

A photo accompanying this announcement is available at https://www.globenewswire.com/NewsRoom/AttachmentNg/20a131a3-a6c4-43ca-a317-4edbd4ab8359 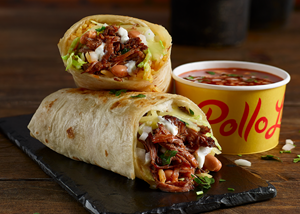 The LA Mex chain is levelling up the festivities with a week full of burrito deals, including the NEW Mexican Shredded Beef Birria Burrito, beginning .