, (GLOBE NEWSWIRE) -- In honor of National Hispanic Heritage Month, (“ (Nasdaq: LOCO), the nation’s leading fire-grilled chicken restaurant chain, is calling attention to the disproportionate gap between the Hispanic community’s crucial contributions to the food and restaurant industry and national recognition of Hispanic culinary talent with the launch of its new For Your Consideration campaign, which spotlights 11 exceptional Hispanic chefs as recommended nominees for the 2022 James Beard Awards.

The Hispanic community is an indispensable part of America’s food scene, holding nearly 30% of restaurant and foodservice occupations1 and accounting for nearly 23% of the country’s executive chefs2 and 18% of its restaurant owners.3 Despite this, they have been overwhelmingly excluded from culinary conversation and recognition. As of 2018, only 2.4% of all nominees for the James Beard Foundation’s Best Chef and Outstanding Chef award categories have been Hispanic.4 And in , where Mexican food is ranked as the most popular ethnic cuisine,5 only one Mexican restaurant was included in the Michelin Guide's 2019 list of best restaurants in the state.6

To help turn the tide of underrepresentation of Hispanic talent and contributions, is taking a page from the playbook of its hometown, where For Your Consideration campaigns are regularly employed during awards season to generate buzz for notable entertainment industry talent. The company is leveraging a variety of physical and digital activations — including a full-page print ad in The New York Times — to publicly share and promote a short-list of 11 extraordinary Hispanic chefs who deserve to be celebrated and merit consideration for the 2022 James Beard Awards. These same chefs and their stories will also be profiled and promoted on El Pollo Loco’s social media channels.

“The Hispanic community is the backbone of the food industry, and yet, the country’s ever-growing wealth of Hispanic culinary talent and contributions continue to be overlooked and underappreciated,” President and Chief Executive Officer said. “Eighty percent of El Pollo Loco’s workforce is Hispanic, and we take great pride in our Mexican roots, so it feels right to pay homage to Hispanic Heritage Month by highlighting this unacceptable disparity to elicit positive change.”

The accomplished chefs highlighted in the campaign are:

In addition to the full-page print ad in The New York Times, is deploying a digital billboard truck with a route in New York City’s neighborhood, where the James Beard House is located. In July, the announced the resumption of its annual Awards program after a two-year hiatus spurred by the COVID-19 pandemic and the organization’s decision to revamp its Awards process to bolster diversity and inclusion. By highlighting noteworthy Hispanic culinary talent who deserve national acclaim and recognition, hopes to meaningfully advance the Foundation’s commitment to help make the 2022 Awards a more equitable and accurate representation of America’s restaurant industry.

is also inviting its loyal customers and fans to take part in its celebration of National Hispanic Heritage Month by tagging their favorite chefs, cooks and restaurant owners who communicate their heritage through their love of cuisine in social media shout-outs. In addition, the company will be spotlighting and celebrating its own Hispanic talent throughout the month and plans to launch a "More Chef Hats" grant program that will award one lucky team member a scholarship to help them further their culinary career.

To learn more about the campaign and join the conversation, visit @ElPolloLoco’s social channels.

About
(Nasdaq:LOCO) is the nation’s leading fire-grilled chicken restaurant with a mission to bring people together around food, family, and culture in the communities it serves. is renowned for its handcrafted food, an innovative blend of traditional Mexican cuisine and better-for-you eating, that is known for. Since 1980, has successfully opened and maintained more than 480 company-owned and franchised restaurants in , , , , , and while remaining true to its Mexican-American heritage. continues to grow and evolve, nourishing connections to tradition, culture, and one another through fire-grilled goodness that makes us feel like familia. For more information, visit us at ElPolloLoco.com. 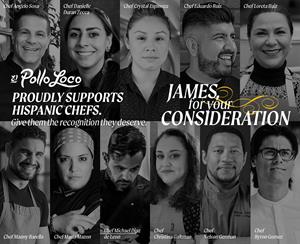 In honor of National Hispanic Heritage Month, is spotlighting notable Hispanic chefs to fan the flames of representation for the community’s vital contributions to the food and restaurant industry.