, (GLOBE NEWSWIRE) -- (“El Pollo Loco” or “Company”) (Nasdaq: LOCO), the nation’s leading fire-grilled chicken restaurant chain, announced today the signing of a multi-unit development deal for five new restaurants in parts of and over the next several years. The deal has been signed with Bunch of , an experienced franchise group whose partners already own and operate QSR West, a franchisee of more than 70 Burger King restaurants across the region.

According to Bunch of president , leases have yet to be signed, but specific areas being targeted for the new restaurants include the - and Medford- market areas. He expects the group’s first to open in early 2023.

“El Pollo Loco’s unparalleled support system and outstanding corporate team made it the obvious choice for us when we decided it was time to diversify our portfolio,” said Sahebalzamany. “Much of the brand’s growth over the past few years has been fueled by existing franchisees, which speaks volumes to how the company goes above and beyond to ensure their operators succeed. Both and are booming markets with unlimited potential for success, and we look forward to bringing the El Pollo Loco brand to these thriving communities.”

The restaurants will feature a new prototype design geared to meet the demands of the company’s off-premise business. Included in the design will be a dining room that potentially opens up to a patio area, as well as a dual drive-thru and designated curbside pick-up parking.

The restaurants will also feature an enhanced digitized experience – including “Pollo To Go” cubbies for mobile to-go and delivery orders, digital menu boards and GPS-enabled curbside pick-up, all integrated with the company’s dynamic and versatile mobile app.

As for the food?

At , the chicken is marinated in-house daily with a proprietary recipe of citrus, garlic and spice, fire-grilled over an open flame and hand-cut to order. The freshly grilled chicken serves as the base for an authentic selection of dishes, including individual or family chicken meals, bowls, burritos and salads. The brand is well-known for a range of flavorful menu items that customers feel better about eating because they are healthier than typical fast food and fit into a host of dietary regimes ranging from calorie counting to keto.

“We are in a robust period of growth in terms of franchising, and we are beyond excited to have such an experienced franchise partner like Bunch of on board to grow with us,” said , El Pollo Loco’s Chief Development Officer. “We look forward to the positive impact their new locations will have on the communities they’ll serve and can't wait for them to open their doors. The next few years are going to be extremely exciting.”

The expansion announcement comes at a time when is aggressively looking to expand its national footprint by 140 restaurants with existing and new franchisees. The company is currently focused on identifying qualified multi-unit franchisees for development opportunities in various parts , , , and ; as well as and .

About
(Nasdaq:LOCO) is the nation’s leading fire-grilled chicken restaurant with a mission to bring people together around food, family, and culture in the communities it serves. is renowned for its handcrafted food, an innovative blend of traditional Mexican cuisine and better-for-you eating, that is known for. Since 1980, has successfully opened and maintained 485 company-owned and franchised restaurants in , , , , , and while remaining true to its Mexican-American heritage. continues to grow and evolve, nourishing connections to tradition, culture, and one another through fire-grilled goodness that makes us feel like familia. For more information, visit us at www.elpolloloco.com.

A photo accompanying this announcement is available at https://www.globenewswire.com/NewsRoom/AttachmentNg/7b1abaf3-af3a-42f4-9d12-01b501fe048b 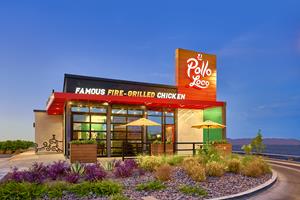 The brand is aggressively looking to expand its national footprint by 140 restaurants with existing and new franchisees.